From EvoEcu
Jump to navigation Jump to search

One of the additions you get with TephraMod is map switching: alternating between a primary and secondary set of fuel, timing, and boost maps depending on the position of a switch. Originally, development of this feature happened in a thread on EvoM; at this point, the feature is considered mature.

Much of the information in this page came from Jack_of_Trades' map switching webpage; unfortunately, details on assembling your own switching harness are no longer available there, in lieu of links to several vendors who will sell pre-made harnesses. For many users, it may be easier to simply buy one that has been professionally assembled and tested.

It can be any SPST switch but it cannot be one with a built-in light because the switch will only have 5VDC flowing through it and only 0.05 mA of current, not enough to power any light or LED.

You only need enough wire to go from the ECU harness (located under the passengers side dash) to the location you desire to install your on/off switch and also to the location you choose to mount the LED indicator light. I suggest running 5 feet for the switch, 5 feet for the L.E.D. and two feet to go from the resistors to the ECU harness for a total of roughly 10 to 12 feet of speaker wire.

This will be installed between the +12Vdc source and the ADC input on the ECU.

This will be installed in conjunction with the 4.7V zener diode. This will help to eliminate any noise in the signal going into the ECU when the switch is in the "OFF" position.

This will be installed between the 1K ohm resistor and the ECU pin and limits the input voltage to only 4.4-5.0 volts (for +/- 5% tolerance versions). Be sure the black stripe is oriented in the same direction as the diagram. You never want to exceed 5.0 volts to the ADC input into the ECU. Search online for this part.

This will be installed between the +12Vdc source and the 1.8Vdc LED indicator light. It will lower the voltage to a safer 1.8Vdc for the LED to operate properly.

The LED isn't absolutely necessary on Evo's equipped with an ICS system because you can use the ICS light in the instrument cluster as your indicator. This option is up to the user. I personally prefer the L.E.D. so I don't have to see the ICS light blinking.

This holds the LED into the panel where you choose to mount it. Just drill a 1/4" hole and it snaps in. A good tip is to place a dab of super glue on the backside of the panel to keep the holder from popping out. It is an Evo after all and they don't have the smoothest suspension.

This will protect all of your electrical connections. Simply slide it over the wire and heat the tubing with a cigarette lighter or butane torch. 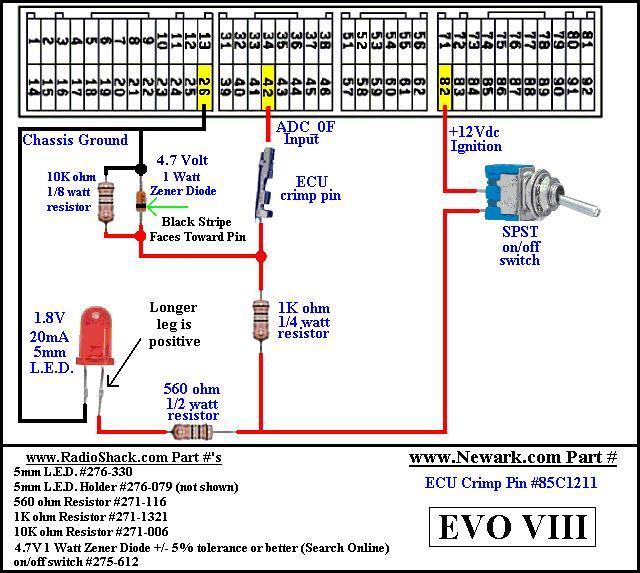 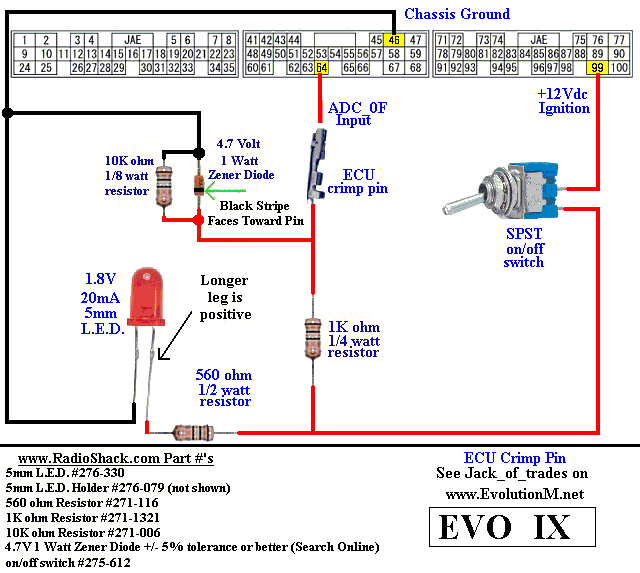 To crimp the ECU pin onto your wire, strip back approximately 1/8" of insulation, and place the wire in the pin such that the insulation is under the outside tabs, but the bare wire is under the inside tabs. Fold one rear tab over the insulation snugly, then fold the other over on top of it, taking care not to "squish" the pin; if you crush the pin so that it is too wide, it may not fit inside the ECU harness plug. Repeat the folding procedure with the inside tabs, and consider adding a drop of solder to ensure a good, secure connection.

Thanks to mrfred for this fantastic writeup on the process of removing pins from the IX harness. Essentially, pull back the retaining clip ("secondary restraint), and the pins should come out easily with a tug.

See these two posts (1 and 2) from Richard L. (Aquamist) for an example of how to unlock the pins on a VIII harness. Basically, lift the white strip from the plug approximately 1/16" with a very small, flat-tipped screwdriver, and the pin you want to remove should pop right out.

Once you have made your harness, you need to decide on where to install the LED indicator and the on/off switch. Be sure to give yourself enough wire to reach just about any location in the nearby vicinity of the drivers seat in case you decide to install either in a different location than you originally intended.

Here are the two locations I used and they are very discrete and easy to access while driving.

These videos were originally put together by Jack_of_Trades, and are hosted on his website.

Connecting to power and ground